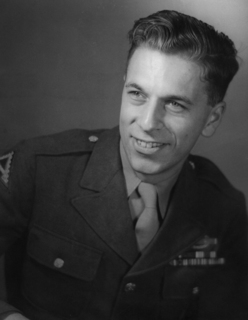 Charles P. Sonett was born January 15, 1924 in Pittsburgh, Pennsylvania. He attended Hollywood High School in Los Angeles, California where he was active in the High School ROTC program rising to the rank of cadet Corporal.
After graduation from High School, Charles entered UCLA majoring in Physics. He enlisted in the Army on October 26, 1942 and finished his second year at UCLA entering active duty May 12, 1943 into the U.S. Army Signal Corps. At Camp Kohler, Charles fell from a telephone pole and injured his back resulting in a three week stay in the camp hospital.

He was assigned to the 103d Infantry Division, 410th Infantry Regiment, 3d Battalion, Company K. While on patrol, March 13, 1945, near Uhrwiller, France Charles stepped on a German mine. He required a battlefield amputation of his left leg - aka above the knee amputation. CPL Sonett was transferred to the Bushnell General Hospital, Brigham City, Utah before going to Letterman General Hospital where he remained until his discharge October 30, 1946.

After leaving service, Charles returned to college where he completed his undergraduate work in Physics at The University of California Berkley. In June of that year he married Virginia Louise Hooten, also a graduate of UC Berkley.

In 1951, Charles received his Master of Arts from UCLA and Doctorate in 1954. Subsequent to his graduation, Dr. Sonett's interest shifted from nuclear physics to rocketry and its application to exploration of the solar system. This interest coincided with the beginning of the space• race. Dr. Sonett was subsequently employed by Ramo Woolridge/STL and NASA. In 1973, at the University of Arizona, Tucson, Dr. Gerard P. Kuiper, who was considered the father of modern planetary astronomy, invited Dr. Charles P. Sonett to become the director of the new Inter-Disciplinary Department; the Department of Planetary Sciences, Lunar and Planetary Laboratory. Dr. Kuiper, who had moved to the University in 1958, hired the first outstanding Lunar Planetary Laboratory scientist and in 1964 won NASA funding for a new building. 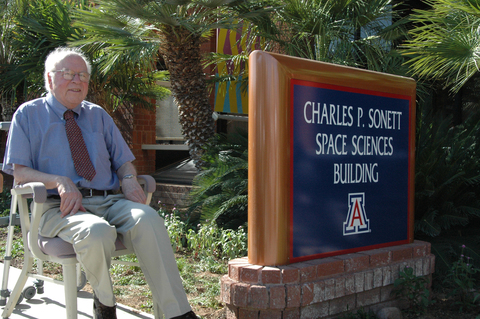 Dr. Sonett continued hiring and soon built a nationally recognized department. Dr. Sonett directed the Lunar Planetgary Laboratory from 1973 until 1977. He became the first to head UA's planetary sciences department, authorized by the Arizona Board of Regents in 1972.

On April 30, 2004, the University of Arizona, Tucson dedicated the Dr.Charles P. Sonett Space Sciences Building which houses around 45 scientists and support staff. At the building's dedication, Dr. Michael J.Drake, Director,
Lunar & Planetary Lab stated, "Bringing Sonett to UA was one of Gerard Kuiper's best moves." Drake went on to add,
"this was the nucleation event. Chuck (Sonett) understood the breadth of what planetary sciences would become, and why it was important to hire first rate people. He laid the roots of the modern lab -- and what has become the best planetary sciences department in the world." CPL Sonett's awards and decorations include the Combat Infantryman's Badge, Bronze Star, Purple Heart, Good Conduct Medal, American Campaign Medal, European-African-Middle East Campaign Medal with three battle stars, and the World War!! Victory Medal, Below is an extract from the Unit History and Journal from the 3d Battalion, 410th Infantry Regiment, reporting the event where CPL Sonett stepped on the German mine.

In 1947, LOOK magazine took a photo of a number of World War II veterans who attended a party hosted by Mary Pickford at her and Douglas Fairbanks famous estate in Hollywood, Pickfair. Below is a picture of veterans who paid a severe sacrifice in the defense of freedom. Dr. Sonett is second from the right. (picture omitted, it was too poor to scan, sorry folks--please use imagination)