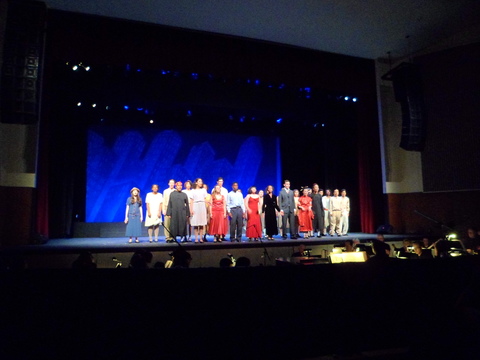 Did you know a student at Hollywood High who later became a Hollywood celebrity?  Who was this person and what was your most interesting memory or experience with him or her when they were attending Hollywood High?  What was this person like as a teenager?
Your name and comment may be used in a story for Discover Hollywood magazine that is being written by journalist Rena…
Continue

A class ring has been found from the Class of 1976. If you can accurately describe it and tell me what initials are inside, then we'll return it to you as the rightful owner! Thank you.

Nolan was the first born son of Max and Frances Ballin of Chicago. He grew up surrounded aunts, uncles, cousins and brother Ernie and sister Elaine. Nolan moved to LA in 1939 and attended Hollywood High School. In high school he worked at McDonnell Douglas Burbank on Dauntless aircraft. After graduation, Nolan joined the Army Air Corps. and served as a drill instructor until the end of WWII. He attended LA City College studying business also acting classes which inspired his lifelong…

The idea of a museum to highlight the history of the school as well as the famous alumni who
attended was spearheaded by Jeanne Hon, principal from 1991-1997. She would go through the
basements and storage areas looking for space to be converted into offices and instructional facilities,
and during her searches she found a great deal of memorabilia stored in boxes and completely
forgotten. “Isn’t it a shame that these treasures can’t be enjoyed by everyone” she would tell…

Jackie grew up Hollywood attended Blessed Sacrament, then graduated from Hollywood High School in 1958. She love the glamorous "Old Hollywood" she grew up in and was a product of that environment her whole life. She bemoaned the decline of her favorite…

It's pretty rare that I feature a vendor on the blog because vendors work for money, we pay them and they get what they asked for and the deal is done.

Michael with MTM Delivery was someone I found off Craig's List because I needed a mover to take the 400 pounds of printed newsletters from Rancho Dominguez to Eagle Rock. He bid less than half of the price of anyone else and because he is doing this for us as a charity, he felt really good about it. And he contacted me with…

Media rights management conglomerate Corbis, through it's Corbis Images division, has become a sponsor of Hollywood High School Alumni Association. Providing rich and interesting imagery, Corbis is supporting our cause by providing materials for our website and newsletters.

Corbis is privately held by its founder and Chairman Bill Gates, who started the company in…

Dear Friends,
By now you have all probably heard about Cheri Fuqua's passing last Saturday after a battle with breast cancer. It is a real tragedy and shock to all of us. My thoughts turn back to the past...when times were simpler and life was mostly so much fun and Cheri was at the center of it all. She and I met in gradeschool, at Cheremoya, and spent much of those young years together, in Brownies, through high school and on into life.. But as we all have gone on to live own lives,…

(right) After climbing Machu Pichu in 2010 My life story since Hollywood High:

I went to UC Berkeley where my undergraduate major was in Sociology and Social Institutions. I lived in a student co-op, and was active in the YWCA and student organizations.

I Married Burt Wolfman in 1952 after becoming 21 years of age. My parents objected to my…

Ralph Andrew Lunstedt, class of ’46, was born May 26, 1918 in Hollywood and passed away March 31, 2011 in Palm Desert.  In World War II he retired as  an Army Lieutenant, 1st class.  He owned California Book Supply in Inglewood, a technical and engineering book store.  He is survived by his wife of 58 years, Bobbie, and two children.

Leif Roebuck Ball, born June 10, 1917 passed away October 16, 2011.  Roby to his friends was in the class of ’35.  Leif joined the Army in World War II and rose to the rank of captain.  He was stationed in England where he met Phyllis who would be his wife for 52 years.  He is survived by three children, eight grandchildren and 12 great grandchildren.

Norman Felipe Valdes Sr passed away December 7, 2011.  Norman was born June 25, 1928, the youngest of three boys.  He attended Hollywood High, Class of ’47, and after graduating  joined the Navy.  He worked 40 years for the Gas Company  and after his retirement worked happily for Home Depot. When Norman passed away he left Frances, his wife of 59 years, six children,15 grandchildren and 8 great grandchildren.