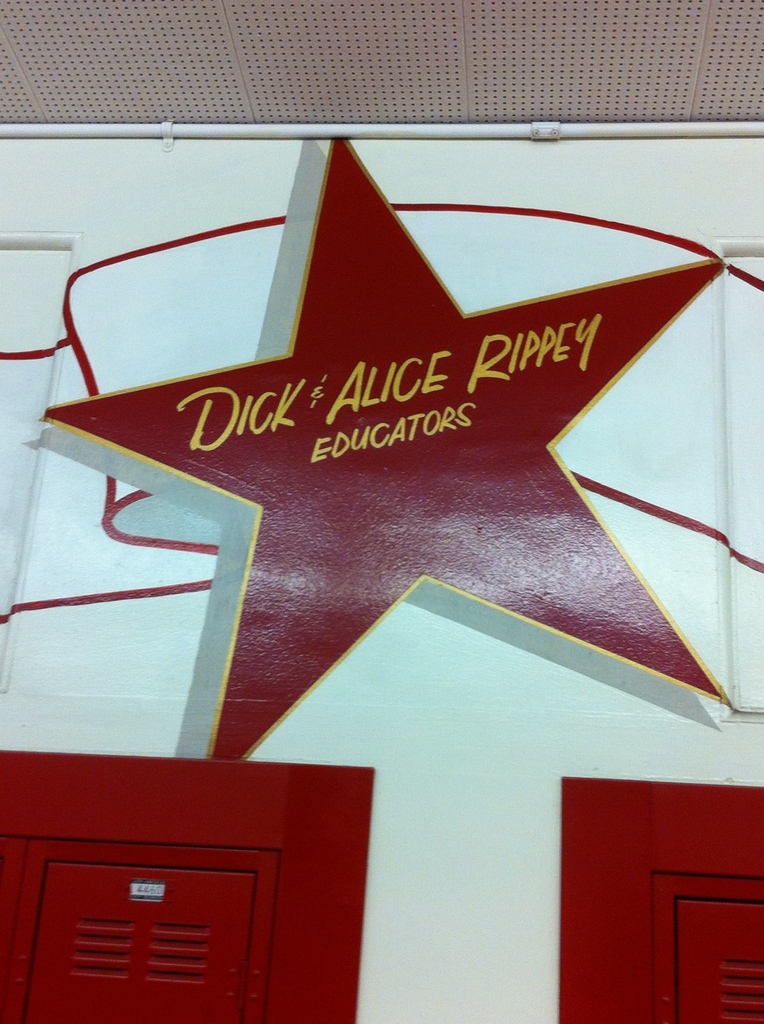 I originally wrote this entry for Facebook on April 29.  I only just learned that Mr. Rippey passed away on April 30.  How incredibly coincidental.  Consider this to be merely a remembrance from a former student.

“Mr. Rippey Never Had a Cavity”

Today I was sitting in the dentist chair and I suddenly recalled Mr. Rippey from Le Conte Junior High School and later at Hollywood High.  He was an athletic coach at both schools and the instant the dental hygienist began cleaning my teeth I remembered that Mr. Rippey had never had a cavity.  Can you imagine never having a cavity or experiencing the angst of having your teeth drilled?  I know Rippey never had a cavity because another coach had announced this to we boys during a Health Class in the mid-1960s at Le Conte’s auditorium; and it must have been true because I could see from my vantage point that day that Rippey was beaming and showing off his sparkling pearl whites to the group.  A couple of years later Mr. Rippey and I moved on to Hollywood High, he as a transfer teacher and me as a new student.   For a time he was my coach on various teams and athletic classes.

Decades went by and somewhere in the 1990s I was in Los Angeles on business and as a lark I decided to amble onto the HHS campus.  I had come after hours one afternoon and decided to make myself known at the central office.  Who should be behind the desk but Dick Rippey only now he had become assistant principal.  I explained who I was and he beamed that toothy smile and ushered me into his office.  We had a short, friendly chat, him asking me about my life and what I had accomplished.  I guess he was trying to remember me, if he could, and suddenly he stood up and asked if I’d like to see the new library renovation.  He had been part of the committee that was central to the planning of the building.  He was obviously quite proud.

Rippey escorted me to what I knew back in the 1960s as the “old library,” but now as we entered the doors it had indeed been rejuvenated.  The interior art deco frescos high above us and originally created in the 1930s were now vivid and bright. The solid oak flooring and trim and been redone as the entire inner space seemed to glisten.  There were still countless books and reference materials, but Rippey made it clear that the library itself was now a museum of sorts with regalia and mementos stored in the various anterooms.  We went into one of the side areas reserved for the photographs of each graduating class.  He knew exactly where 1967 was upon the walls, and yes, there was my mug along with the five hundred other boys and girls who walked across the Hollywood Bowl stage that year to get their diplomas.  After the tour he shook my hand, wished me luck, and that was the last time I ever saw him.

I discovered later that Hollywood High had borrowed the theme of Hollywood Boulevard with its “stars of fame” walkway.  HHS honors her more famous alumni (and there have many) with their names emboldened upon stylized, brilliant red stars painted upon the interior corridor walls of the buildings.  Mr. Rippey and wife Alice as educators were so honored with their own star along one of those walls adjacent to the administrative offices.  He is one of the few faculty members to have ever been acknowledged in this way.  He was never in show business, but he must have made an impression a lot of kids.

Well, that’s my story, and all of that from sitting at the dentist office today.  Thank you for your indulgence.

Thank you for your note.  It is obvious from what you wrote that Mr. Rippey made an impression on you as he must have upon many other students.  I always found him to be gregarious and kind.  I first discovered news of Mr. Rippey's death on this HHS site just last week.  Oddly, I had posted my recollections of him first on Facebook the day before he passed away.  A bizarre set of circumstances sent me to go online to the HHS site and there was his obituary.

Nice to hear you aced the mechanics test.  Good on you "Lady Mechanic."  Sorry to hear about your run-in with "Bertha."  I think she was girls' VP.  The boys had to deal with Mr. Beck.

It would seem that we had similar schooling and lived in the West Hollywood environs during the 60s.  I trust you are well.  I live in Canada now where I moved and made a living several decades ago.  Cheers, my fellow alumna.

Do you know how he died? Was his wife a teacher at HHS too? He was one of my teachers 11th grade 1967-68. The class was about career choices. We took tests and I scored the highest in the class on the Mechanics test. It was the best grade I got at HHS. Boys called me the lady mechanic. Mr. Ripley beamed as he gave me my exam. Bertha Standfast kicked me out at the beginning of 12th grade. Mr. Ripey would not have done that if he had been in charge. He remembered me in class from supervising  us kids summer of 1965 in the Le Conte Jr. High Gym. I went there everyday to play ping pong and basketball. It was a fun summer thanks to Mr. Ripley. Vicky Valentine class of 1969.

It is with deep regret that I must inform you that our classmate, Carroll Brown, HHS Class of Winter 1970, died on Friday, December 30, 2022.Carroll had been battling various health issues for years.  He was hospitalized for several weeks before…See More
Jan 23
0 Comments