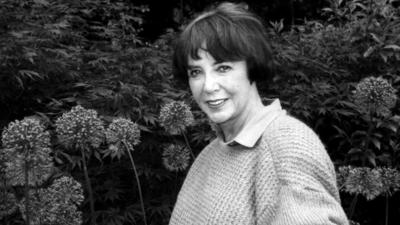 June Harwood, a Hollywood High School Art teacher for many years.
She was the last remaining major artist associated with the "hard edge" movement on the West Coast.
June Harwood / NoHo Modern Gallery

Abstract painter June Harwood, who was part of the so-called hard edge movement of the 1950s and '60s, has died at her home in Studio City where she lived alone. She was 81.

Her body was found Sunday by a friend who came to check on her.

Harwood had been in frail health for several months, said Dennis Reed, former dean of arts at Los Angeles Valley College where she taught from 1975 to 1993.

FOR THE RECORD:
June Harwood: A news obituary of artist June Harwood in the Jan. 9 California section said that her work was included in a 1964 exhibit in San Diego. The 1964 show was in Newport Beach.
------------

Many of her early paintings consisted of shapes that were more or less rectangular, often in silver, gray and black, defined by crisp lines and edges. Characteristic of hard edge paintings, they had a flat, geometric look.

"As the light changes, the image appears or disappears — now you see it, now you don't," she said in a 1968 Times interview. "This fascinates me."

Although she often worked with oils on Masonite in her early work, eventually she used acrylic paint on canvas.

Times art critic Christopher Knight, in reviewing a 2003 retrospective of her work at NoHo Modern in North Hollywood, said, "Following the trajectory of these paintings is rather like watching tectonic plates begin to shift, break apart and slowly bend beneath unseen forces of stoppable pressure — rather like the unfolding decade of the 1960s itself."

She did not, like some painters of the time, restrict her work to precisely measured geometrical forms. "Like jazz," Knight wrote, "the painting gives a platform to improvisation within an aggregate of formal rules."

A new, long-planned retrospective, "June Harwood, Splinter, Divide and Flow," is scheduled to open at the Louis Stern Fine Arts Gallery in West Hollywood on Jan 22.

June Beatrice Harwood was born June 16, 1933, in Middletown, N.Y., where her father was a physician. She got her bachelor's degree in fine art from Syracuse University then moved to Los Angeles where she taught at Hollywood High School.

She got her master's in art from Cal State Los Angeles.

Harwood was not part of the first exhibition of work considered to be hard edge, a term coined by art critic and curator Jules Langsner. That 1959 show in Los Angeles included paintings by John McLaughlin and Lorser Feitelson. Harwood's work was included in a 1964 hard edge show in San Diego, also curated by Langsner, whom she married the following year in Italy.

Two years later, he died at 56. The shock of his death kept her from painting for a while and she moved from the house they had shared. Friends such as painter Sam Francis helped her settle into an apartment where she could continue her work. And she continued teaching.

"I feel I can teach well and understand what kids are groping for," she told The Times in 1968. "The art field has never been more wide open or accepted, but at the same time, there are so many possible directions."

She told her students that no matter what direction they chose, the basic formula for finding meaning in their work is always the same.

"To be a painter, you have to be able to see yourself and understand," she said, "and this is difficult for any generation."

I think she was my art teacher 11th grade 1967-68. I remember when her husband died, she took some time off. She was a very unhappy woman in that class, at that time. We had to draw a house in black and white and then post it for critique. One girl loved my house the most and the teacher asked why, and she said cause it's different. I did an abstract rather than realistic with shading like everyone else. June Hardwood didn't like anything I did in that class.