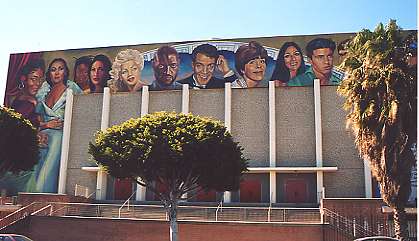 The HHS Auditorium Mural – John Ritter Presents A Tribute to
Diversity in Entertainment!


Back in the spring of 2000, Los Angeles based muralist Eloy Torrez was looking for a suitable location to produce a personally relevant work that would make an impacting visual statement about diversity in Hollywood’s entertainment industry. As a baby-boomer and avid consumer of 60’s and 70’s pop-culture television and music, Eloy was always taken with the entertainment industry and the ethnic melting pot of talent that for decades found their way onto Hollywood movie lots and recording studios. Being of Hispanic origin himself from Albuquerque, N.M, Eloy was particularly sensitive to how the “Hollywood dream” served as a magnet for aspiring young talent from wide ranging cultural identities. Eloy was already an exhibited oil-on-canvas painter in Europe and the U.S., as well as a well recognized participant in the Southern California muralist community when he started his search for the ideal outdoor location for his new work. The Los Angeles Community Redevelopment Agency/Community Development Department had previously backed the Otis College of Art and Design graduate with a grant to produce a “Legends of Hollywood” mural that adorned the corner of Hollywood Boulevard and Cherokee Street, until the Northridge earthquake devastated the work in 1994.

Then in the spring of 2000, Eloy finally discovered an ideal canvas – the large expanse of frontage wall over the Highland Avenue entry to the Hollywood High School Auditorium. Eloy met with then HHS principal Dr. Floria Trimble, an African American, and convinced her to facilitate, with the support of LAUSD, the installation of the diversity in entertainment mural on the auditorium. He proposed to Dr. Trimble that celebrities Cher (Armenian), Dorothy Danwich (African American), Lawrence Fishburne (African American), Dolores Del Rio (Mexican) and Bruce Lee (Chinese) would be representative of diversity in mainstream entertainment. So as to make the work even more relevant to HHS students and alumni, Dr. Trimble formed an advisory committee of faculty and students to also select for inclusion in the work HHS alumni who were established success stories in film, television and music. The committee selected HHS celebrity alumni Brandy, Ricky Nelson, Judy Garland, Carol Burnett and Lana Turner. Eloy and his team of dedicated assistants required two years, often toiling in hot and cold weather, to complete the mural, which had the support of the Hollywood Arts Council; the Mural Conservancy of Los Angeles; Jackie Goldberg, Assemblymember, 45th District; Eric Garcetti, Councilmember, 13th District; and Tom LaBonge, City Councilmember, 4th District.

Curt Firestone left a comment for JOE E FAY
"Joe, Good to hear from you.  I do not recall any email with a photo of 2 friends.  Steve Fine:  I have been told several times that he passed away.  Do you know any details?  I could not an obituary.  I also do not know…"
Aug 9